Special to the Acorn 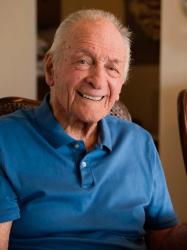 George Benson has been active all his life. He ran a floor care and cleaning business in the San Fernando Valley from 1977 to 2001 and has always done his best to keep moving every day.

The lifestyle has worked well for the soon-tobe 96-year-old Leisure Village resident.

Benson said he felt he was slowing down about 10 years ago when he had a back issue—a problem that led him to try yoga and a whole new way to move his body.

“My wife, Joyce, and I were walking by the shops up on Santa Rosa Road, and we walked by the yoga studio there. I said, ‘Why don’t we go in there and ask them about my back?’ It changed my life,” he said.

The studio was the Camarillo Yoga Center on Santa Rosa Road.

“He was already standing really straight and he had good posture,” said Audrey Walzer, owner and director of the center. “He got his back better and pretty quickly he was doing intermediate classes. He really works at it and at that time was in classes with 20- and 30-year-olds.”

Benson, who has been a vegetarian for more than 65 years, was “in love with yoga,” he said. He worked at it and began subscribing to yoga magazines.

“It became not only physically good for me but also a social thing. I’ve met great friends through yoga, including Audrey.”

But about three years ago, Benson developed an eye disease that required him to wear an eye patch while he healed.

Walzer said wearing the patch caused Benson to look down when he walked.

“The result was that he got hunched over pretty quickly,” the yoga instructor said.

Benson now uses a walker and that has led to problems with his legs, Walzer said.

“We’re working on loosening him up a bit,” she said, adding, “He’s been able to get back some range of motion, and we’re getting there.”

As Walzer talks, Benson demonstrates some of the stretches and movements that help him.

“It just allows me to feel better,” he said. “It upsets me to no end that I have trouble walking, but it’s the hand I’ve been dealt and I’ve got to deal with it.”

Benson served in the Navy during World War II, based at Pearl Harbor after 1941.

“I was supposed to serve on a ship called the Blackhawk that was headed to the Philippines,” Benson said. “But a lieutenant I knew wanted me to stay with him at Pearl, and he transferred me. I must have been pretty lucky because the Blackhawk was torpedoed and they lost a lot of men. I could have been one of them.”

Benson married after the war. He and his first wife had four children before she died. He married Joyce 37 years ago and they had one child.

Joyce doesn’t do yoga, but she said it’s been good for her husband.

“ He really loves it. His friends come from there and it really does help him physically,” Joyce said.

“I’m really glad he went into the classes. It’s been wonderful.”

Walzer says yoga is good for anyone of any age.

“The biggest thing that people say to me is, ‘I can’t do yoga, I’m not flexible.’ It’s kind of a misnomer,” Walzer said. “Yoga is a tool to keep yourself healthy and balanced. It’s not about being good at it. It’s not about a standard or goal. It’s about practicing healthy living.”

Benson will continue to do his best to stay healthy.

“The thing is, I move a lot and I eat fresh foods,” said Benson. “It doesn’t hurt that there are a lot of pretty girls who go to the classes with me, either.” 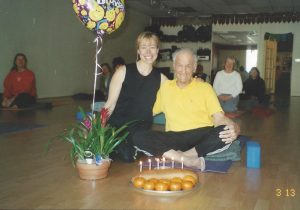 This holiday season, remember:   Your good health is the best gift of all!

“Why are you saying, “Do you mind moving your leg?” I don’t mind. I want to do this. I love to do this.”  These words are gifts from my good friend and yoga student George Benson, who practiced yoga with me regularly until a week before he passed away in August, at the age of 96.

George’s determination to keep up his strength and live life to the fullest, despite limitations due to an internal issue last year, inspired all of us at Camarillo Yoga Center.  How could anyone think of complaining about a little physical effort to stay in good shape, while George made it clear he was not to be babied at 96, and that his lifelong exercise and nutritional discipline had provided him excellent health well into the years when many are in sad decline?  His puzzlement at the idea that someone would mind doing whatever it takes to be in good health was an insightful commentary on the changes in our physical culture during the decades of George’s life. 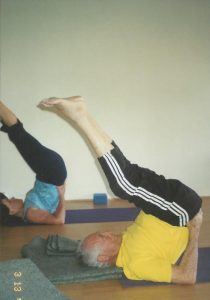 As a young man in the navy, George began working out with weights, and continued an active life, swimming, hiking and running, until he developed a back issue at 86, and found yoga at Camarillo Yoga Center.  Many years of strengthening, and working at jobs involving physical labor had caused tight muscles; George discovered that with a dedicated stretching program, his back pain was relieved entirely, and he became a fixture in our classes.  At an age where many would give in and give up, George, as he always said, “played the cards he was dealt,” and made the effort to live with gusto into his nineties.  At his memorial service, George’s daughter told us juicing was not a new fad in their lives- her dad bought massive bags of carrots for juicing in the 1950’s!  A vegetarian for 65 years, George eschewed sugar and junk food, but loved to eat and delighted in healthy, tasty recipes, many with vegetables from his own garden, prepared by his beloved wife, Joyce.  George was always quick with a joke, and his love of life was infectious. 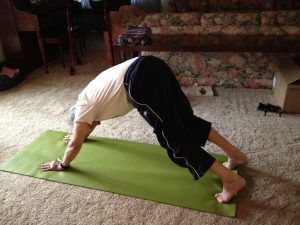 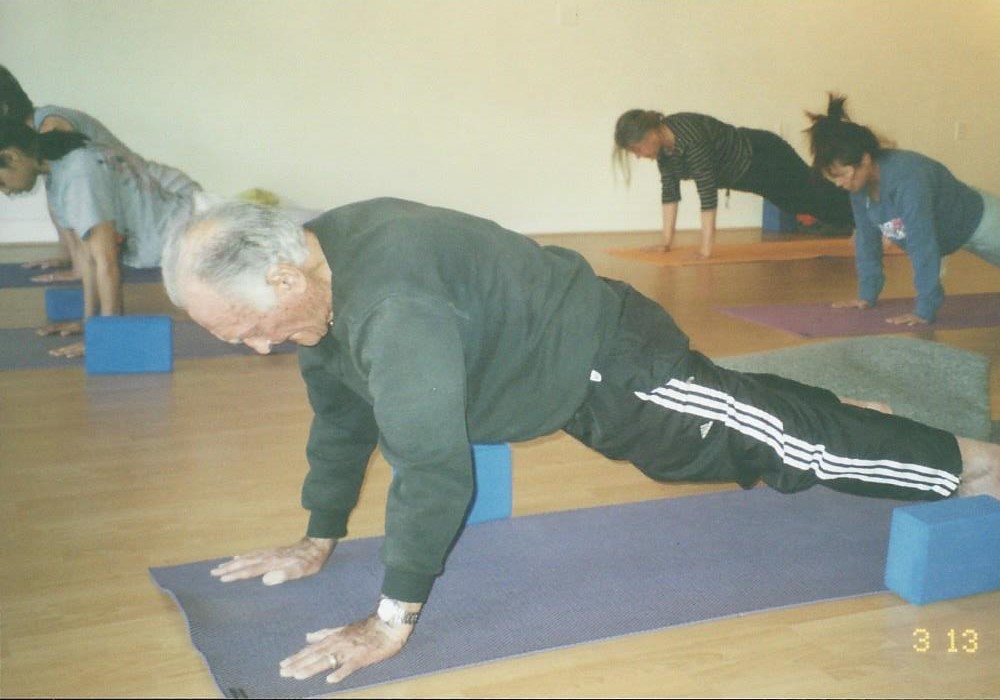 In contrast to George’s active, healthy life, statistics show that today, only 30% of adult Americans take part in exercise of any kind!  Not surprisingly, 35.7% of adults and 30% of children are obese, and these numbers are growing rapidly.   Having been a teacher of yoga and movement for adults and children for over forty years, my experience is that fewer people tell me they enjoy moving their bodies, and working up a sweat. I regularly hear that perspiring or being warm “makes me uncomfortable” and “I really should exercise, but I just don’t like the feeling.”  Additionally, we think of fatty, fried or sugar laden foods as treats, and “make ourselves” eat fruits and vegetables.

When did it become a burden to move our bodies the way nature intended, and to eat foods nature provides without draining them of all nutritional content? When did we lose sight of the gift of good health?

One clue is to look at the major labor-saving technological changes in the span of George’s lifetime:

My belief is that the “progress” which has allowed us to be more “comfortable” and have more leisure time, has weakened our bodies and our minds, and taken away the gift of effort, of sweat, of overcoming obstacles through our own application and persistence over time.  We look for easy and fast at every turn, and fall prey to gimmicks that tell us on every level that we can look good and feel good without having to do anything at all. 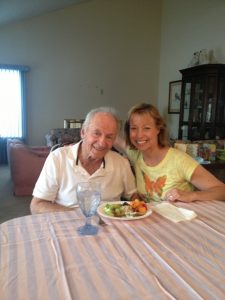 The holidays are nearly here. While we shop online for more stuff, “treat ourselves” with holiday sweets and overeating, and create back pain driving far and wide, let’s remember George, and what is really important-

The best gift you can give yourself, your family, and the world, is a healthy you.  Let’s change our minds about what we “mind” and what we enjoy.  Let’s get strong and proud of it. Start small.  Enjoy a walk with a loved one.  Ask for a bicycle for Christmas.  Take pride in the “effort” it takes to wash some blueberries for breakfast, or create a meal that’s healthy and tastes good.   George taught me that a life well-lived requires effort, and that the effort itself can be joyful!

Joy to all this holiday season!